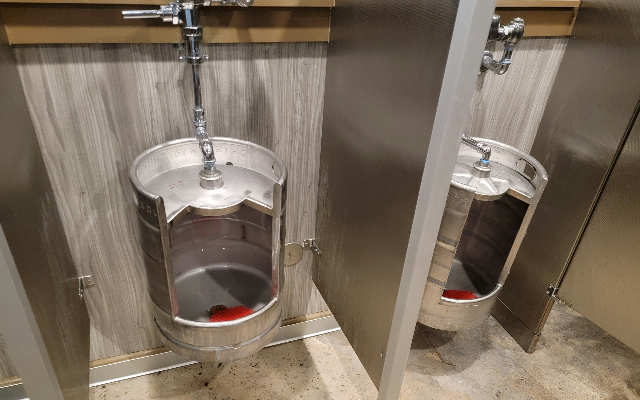 Believe it or not, there are scientists out there who are working tirelessly to improve our experience with…restroom URINALS.

And, apparently, they’ve just had a breakthrough with the annoying SPLASHING issue!

Scientists now claim they have developed a new design that drastically reduces splash-back.

Unlike a standard, rectangular urinal, this one is tall and narrow. There’s also a triangular opening that extends back to a crease against the wall.

Imagine the shape like this: It’s like using a letter opener to cut open the top of a giant envelope, prying it open with your fingers and then peeing into it.

It’s the fourth one (the second one from the right) in this photo.

So, this new design can cut down on splatter, IF you can hit the narrower target.

The urinal was just presented at the annual meeting of the “American Physical Society’s Division of Fluid Dynamics” in Indiana last week, so it’s too early to say when you might start seeing them out in the wild.