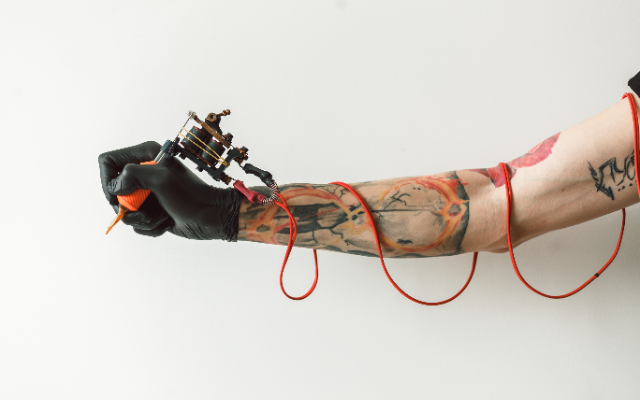 Today (9/16/22) is National Tattoo Story Day! So, tell someone the story behind yours at some point today, because nearly ALL tattoos have an interesting or very personal story behind them.

Whether you got your tattoo to make people think you were anti-establishment, maybe you did it on a dare, you wanted to be a little more impulsive, you wanted to honor a loved one or you just wanted to prove how tough you are (those suckers hurt)!

But the story of the tattoo industry itself just got a little more complicated: a team at Georgia Tech just invented PAINLESS tattoos!

Normal tattoos involve a small needle jabbing you over and over. But the new technique doesn’t use needles at all, at least not conventional ones.

Instead, there’s a patch with thousands of microscopic needles on one side, so small you can’t even feel them.

But the tattoo is still permanent.

The needles aren’t even metal.

They’re MADE of tattoo ink that’s encased in a material strong enough to get through your skin, then it dissolves.

Each tiny needle represents a single pixel. And they can be arranged any way you want to create letters and designs. So instead of a tattoo artist, you could design it on a computer, order the patch online, and stick it on all by yourself.

They also say they’ll be cheaper than a normal tattoo.

And there’s a lower risk of infection, because there’s no blood.

Here’s a prototype patch and an example of a tattoo.