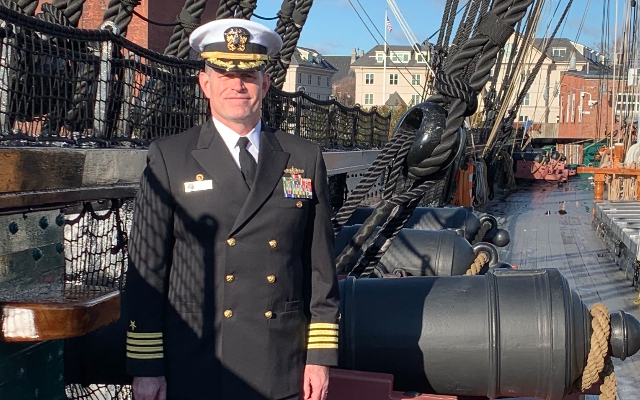 Lofgren is a 1989 graduate of Berkner High School in Richardson, Texas and graduated from the University of Texas in 1993.

“I am the commanding officer of the reserve unit that supports U.S. 4th Fleet and U.S. Naval Forces Southern Command and our goal is providing predictable and reliable operational support to the commander of 4th Fleet,” said Lofgren.

“I joined the Navy because our family has served in practically every conflict since the Revolutionary War,” Lofgren said. “I directly followed my father and grandfather who were both Naval aviators.”

Lofgren is proud to continue a family tradition to serve in the military.

“I think it’s a great opportunity to see the best of Americans every day and it is a true privilege to serve alongside other reservists who are active in their civilian jobs and are also dedicated to putting on the uniform to be part of something bigger than themselves,” Lofgren said.

According to Lofgren, the values required to succeed in the Navy are similar to those found in Plano.

“I learned that none of us get anywhere on our own and it takes a community, teamwork and a support system,” said Lofgren. “Texas truly fosters all of those beliefs and growing up here we quickly realized there are high expectations for everybody in the community to serve in whatever capacity they’re able. For me it was a natural fit to serve in uniform.”

As a member of the U.S. Navy Reserve, Lofgren as well as other sailors, know they are a part of a tradition providing the Navy the nation needs.

“I’m most proud to have had the privilege to serve along with folks who feel passionate about giving back and the opportunity to wear our nation’s cloth,” said Lofgren.

December 2nd, 2021
View full playlist
Connect With Us Listen To Us On