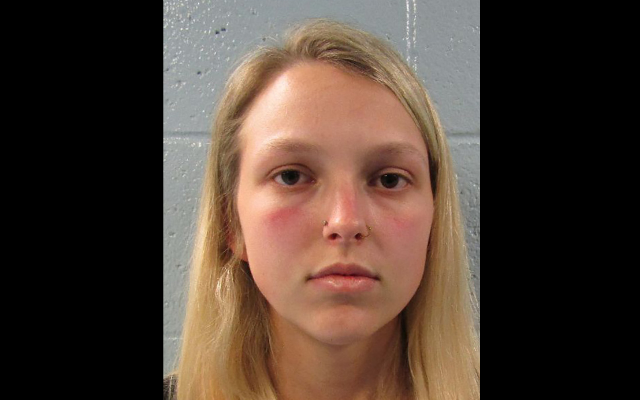 Teenagers think they know everything. My own kids have proven that time & time again.

So it’s satisfying to see one of them be THIS naïve and stupid every now and then!

An 18-year-old named Blakelee Sands – a 2020 graduate of Sulphur High School – (and who apparently played softball for the Bulldogs her Freshman year) tried to go to a bar in Edmond, OK on Tuesday, and was VERY confident in her FAKE I.D.

The bartender carded her, because she looks like she’s about 15 years old, as you can clearly see from her mugshot.

When Blakelee flashed her fake I.D., the bartender confiscated it.

But instead of just leaving the bar & admitting defeat, she called the COPS!

When officers showed up, Blakelee told them the I.D. was totally real and that the bartender wouldn’t give it back to her.

Problem is – the name on the FAKE I.D. was “McKamie Queen”

Yeah, not a very common first OR last name.

(Thinking someone watched Superbad a few too many times & bought into the whole “McLovin” thing a bit too much.)

So, police ran the license number & it came back saying that it belonged to a random guy named Robert Sanchez…in Texas.

Now, poor McKamie…uh, I mean…Blakelee is facing charges for trying to mislead police by presenting a FAKE I.D.