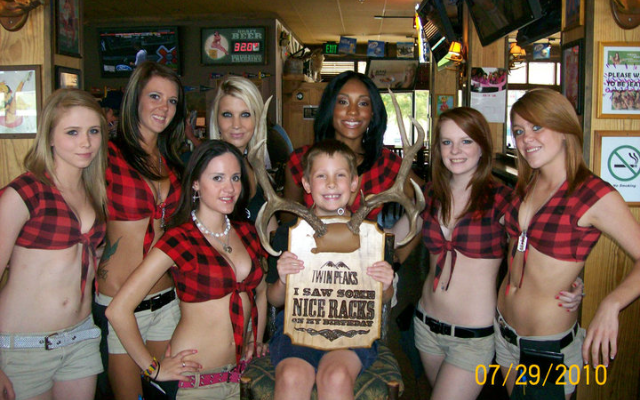 Is this bad parenting or are people just overreacting? A mom in Iowa posted a TikTok video after she and her husband took their kid to Hooters for his 5th Birthday. Some people think that’s inappropriate.

The kid’s name is Zander. And for what it’s worth, it looks like he had a pretty good time. The servers did their birthday thing, where he had to stand on a chair and flap his arms like a bird while they sang to him. Fun times!

“The New York Post” did a big write-up with the headline, “Mom BLASTED for taking her son to Hooters.”  But most of the TikTok comments seem pretty positive.

A lot of people made jokes like, “living the dream,” or that Dad got to choose the restaurant this year.

Other people claimed it’s just a “normal birthday” in more rural spots that don’t have a ton of restaurants.

One person joked it was the day Zander realized video games were lame. Even Zander’s mom replied to that one and laughed.

A lot of people in other countries have also commented and seem surprised people take their kids to Hooters at all.

Personally, I don’t see why it’s a big deal.

My son, David, picked Twin Peaks as the place he wanted to go for this 9th Birthday back in 2010. In fact, that’s him in the picture you see at the top of this post – holding the big board that says, “I saw some nice racks on my birthday” surrounded by all the Twin Peaks servers.

I mean, they have good food, right?