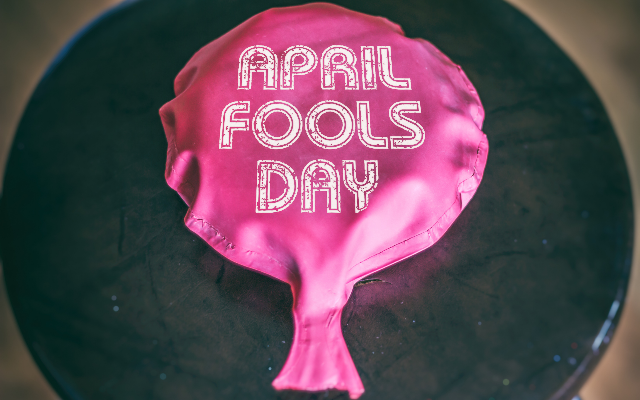 It’s April Fools’ Day, so expect to see a lot of FAKE products and promotions from brands today. That’s kind of the tradition now.

A few early ones we saw were a Butterfinger-flavored mayonnaise by Hellmann’s . . . a full-body metaverse gaming suit from the computer brand Razer . . . and an Australian amusement park’s ad for a new underwater rollercoaster.

Also, a random Facebook post claimed Oklahoma was getting its first IKEA . . . then people were angry when it wasn’t true.

1.  We’re more likely to enjoy pranking people than BEING pranked.  46% of us like pulling pranks, compared to 35% who enjoy being the target of one.

3.  The most common reaction to a prank is to smile and say, “That was a good one.”

4.  The top people we’ll prank today are family members, friends, our significant other, and our coworkers.  That includes 7% who might prank their boss.

(If you do want to prank someone, here are a few ideas that are cheap and easy.)

Here are some CLASSIC April Fools’ Day pranks from previous years (some successful, some not):

65 years ago – In a 1957 April Fool’s Prank, the BBC announced that because of a mild winter in Switzerland, spaghetti trees were producing more spaghetti than normal.  And they showed footage of people pulling strands of spaghetti off tree branches.

People immediately started calling in asking how to grow their own spaghetti tree.  So the BBC told them, quote, “place a sprig of spaghetti in a tin of tomato sauce and hope for the best.”

37 years ago – In a 1985 April Fool’s Prank, “Sports Illustrated” claimed a rookie pitcher named Sidd Finch was planning to play for the Mets.  They said he could throw 168 miles an hour, and that he trained at a monastery in Tibet.

Mets fans went nuts, and the magazine was flooded with requests for more information on a guy who didn’t exist.

26 years ago – In a 1996 April Fool’s Prank, Taco Bell said they had bought the Liberty Bell and were renaming it the “Taco Liberty Bell.”  Outrage ensued.

22 years ago – In another cruel April Fool’s Prank from 2000, a Romanian newspaper announced that dozens of prisoners would be released from prison.  So their families showed up to take them home, only to find out it was all a joke.  The newspaper later published an apology.

17 years ago – In a 2005 April Fool’s Prank, Maynard from Tool played a HI-larious prank by pretending to have found Jesus, just like Brian “Head” Welch from Korn did.

13 years ago – In a 2009 April Fool’s Prank, FunnyOrDie.com devoted their ENTIRE website to Reba McEntire . . . right down to renaming the front page Reba Or Die.

12 years ago – In a 2010 April Fool’s Prank, Ben and Jerry’s announced the world’s first virtual ice cream.  They claimed you could test the flavor of the ice cream just by licking your computer screen.  If only this one were true.

11 years ago – In a 2011 April Fool’s Prank, the guys in Hanson pretended to have a Slipknot cover album in the works.  And to sell it, they leaked a video of the band rehearsing the Slipknot song “Wait and Bleed” in their hotel room.

10 years ago – In a 2012 April Fool’s Prank, Mitt Romney’s campaign staff had Paul Ryan introduce Mitt at a pancake breakfast, that was supposedly filled with supporters but when Romney walked in, the room was empty.

Nine years ago – In a 2013 April Fool’s Prank, Sharon Osbourne “announced” that she was pregnant.  She said she went to an in vitro clinic, got a donor egg, mixed it with Ozzy’s sperm and had it implanted in her 60-year-old womb.

Eight years ago – In a series of 2014 April Fool’s Pranks, NPR tried to convince people that Keanu Reeves was remaking “Citizen Kane” . . . starring himself as a fictionalized version of Fox News billionaire Rupert Murdoch.