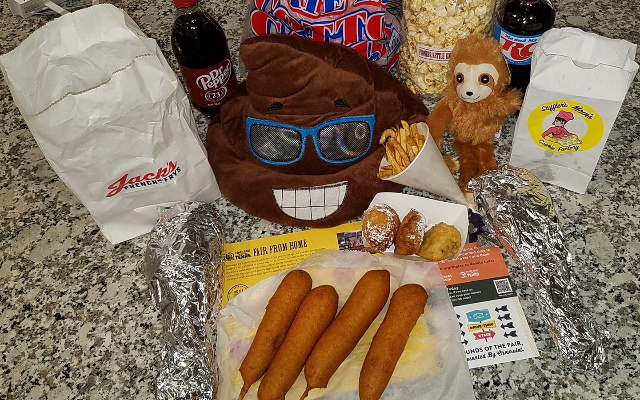 Well Mad Rock Nation, my family & I finally had the opportunity to go through the Big Tex Fair Food Drive-Thru at Fair Park in Dallas this past Saturday (10/3/20).

As I mentioned on the air, it was the way my wife & I celebrated our 22nd wedding anniversary. My wife loves the State Fair of Texas and was very disappointed when they cancelled the event for 2020. So, when they announced the drive-thru set up, I bought our tickets the day they came out.

And, of course, we had to include our two kids, since we could have up to eight people in the car for the drive-thru event. 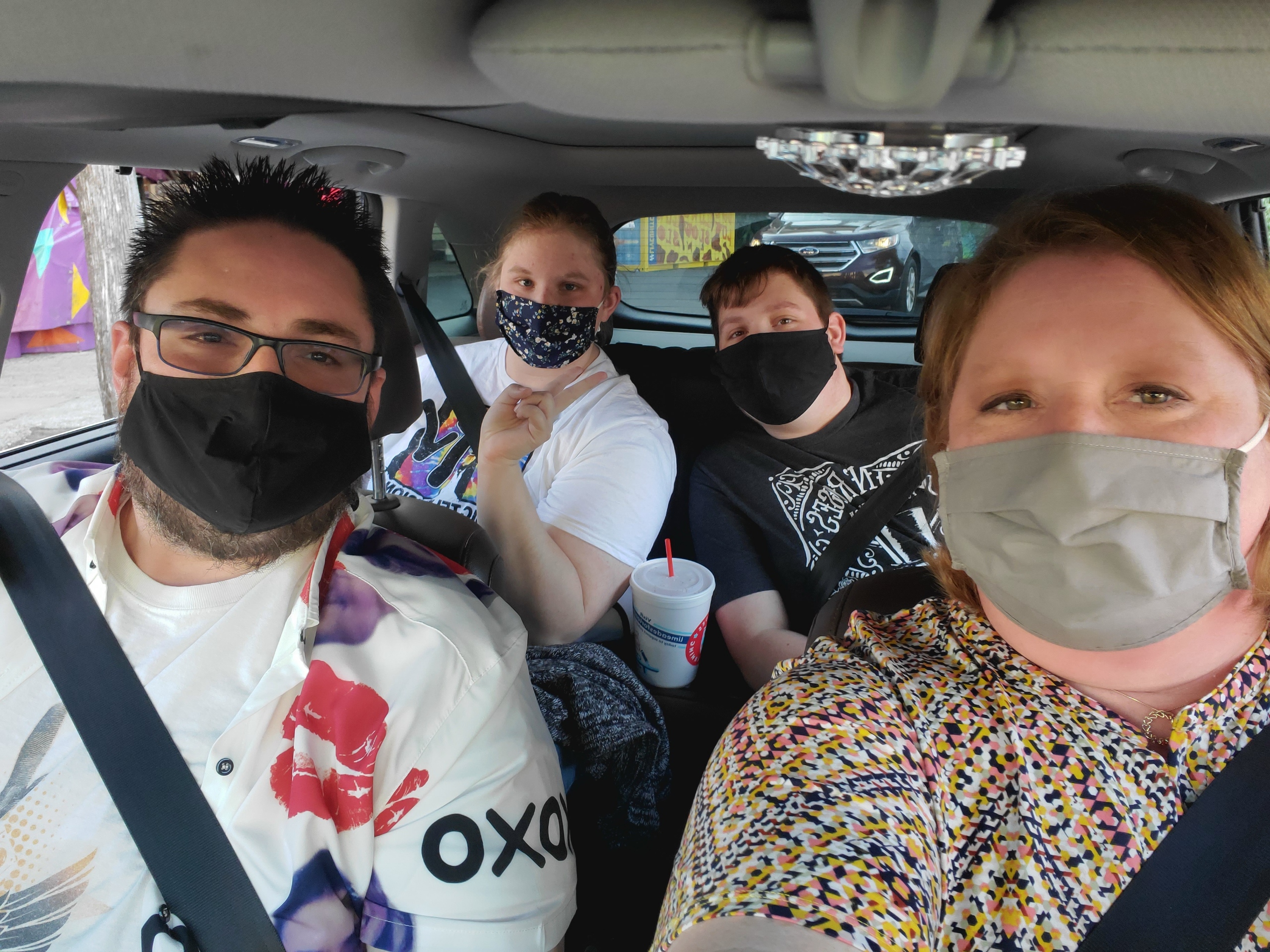 Honestly, we were a little concerned about how long it would take to get into Fair Park & through the Drive-Thru experience, because of all the reports & complaints on social media that it was taking people 2-3 hours the week before.

But, whatever kinks or issues they had the previous week were apparently all worked out (or we were just incredibly lucky), because once we got to Fair Park we entered through gate 11 and started driving through the drive-thru in less than 5 minutes!

We bought one of the food packages where we got 2 Fletcher’s Corny Dogs, a bag of Jack’s French Frys, a bag of Kettle Corn, a bag of State Fair Cotton Candy, Fried Oreos from Stiffler’s Mom’s Cookie Company, 2 drinks + a midway prize (they gave us two for some reason). We then added on additional food – 2 more Fletcher’s Corny Dogs & 2 Turkey Legs (those were for me & my daughter). All total, it cost just over $100 for the tickets & food. And, it was well worth it! Check out our haul… 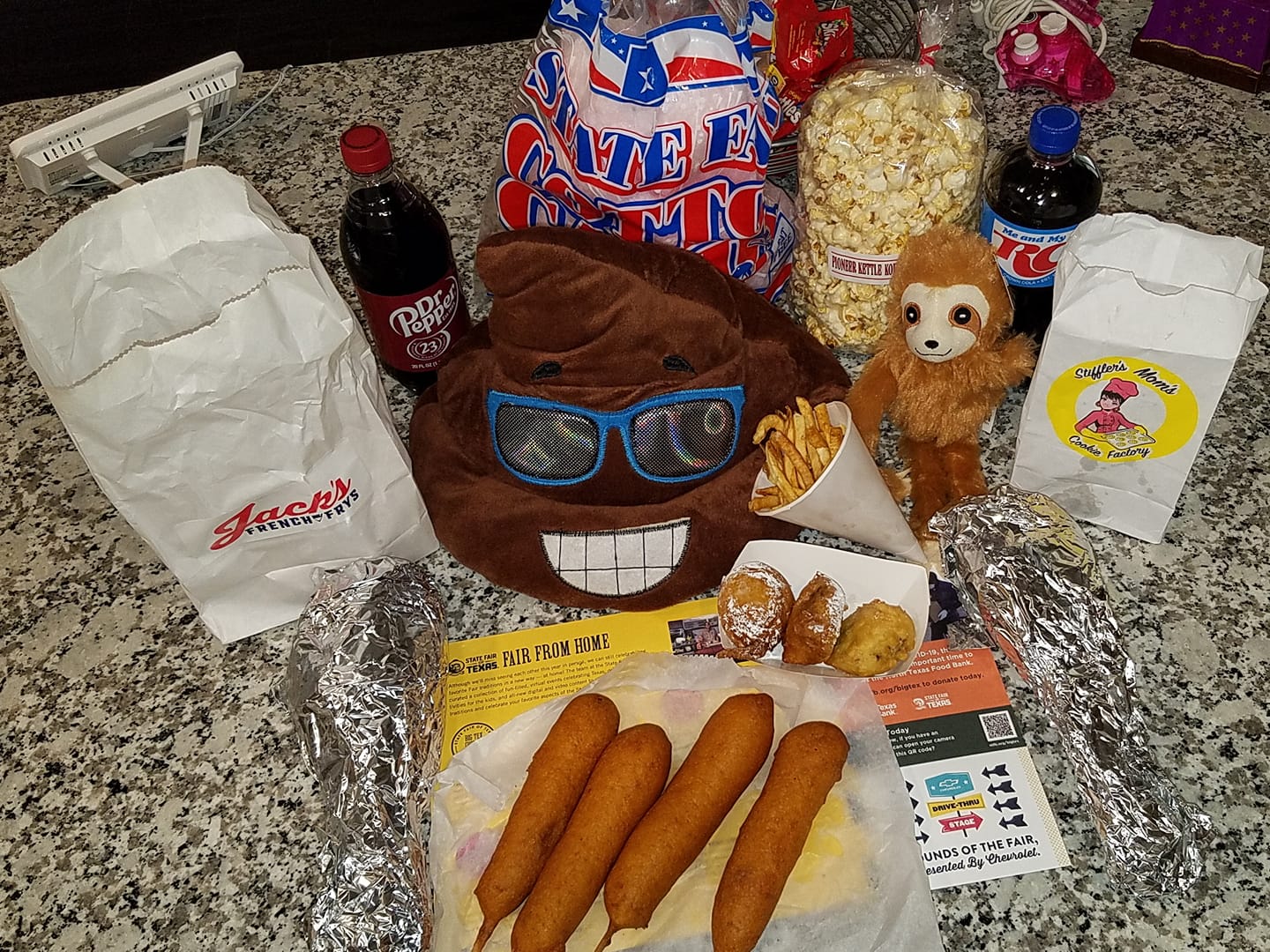 The whole thing was very organized. Each of the food booths were separate stops along the route. They looked at the order form the gate attendants marked & had us put on our windshield. And, from that they knew how many bags or items to give us.

It was all done in a very socially-distant manner. With the items put on a tray & then, with arm outstretched, putting it close enough to me so I could grab it & hand it to someone else in the car. Of course, they were all wearing masks, gloves, etc.

Displayed in the spaces between the food booths were numerous photos of the State Fair of Texas events, activities, buildings and other fair related things from the 1800’s through today. Seriously, there were A LOT of them. My daughter was particularly amused with the clothing fair attendees wore in the late 1800’s, commenting how uncomfortable they looked & how hot it probably was to have to wear all that while walking around Fair Park. I agree, it did look very uncomfortable.

We got a good look at several new car models, including some Toyota models that were parked along the route. My eye, not surprisingly, went straight to the bright yellow Toyota Supra that were on display. We also passed by the Chevrolet stage, where they actually had a LIVE band playing as we drove by & admired all the cars. Personally, I couldn’t keep my eyes off the brand new Corvette sitting there.

Just past the stage, the fair workers guided us into a parking spot. This was the part of the drive-thru where we get our picture in front of Big Tex.

We were ushered into a very short line, assigned to one of 9 booths (we were in number 8) and then told we could take our masks off to get our picture in front of Big Tex (who IS wearing a mask). Now, behind us, that loud booming voice was unmistakable. As he said, “HOWDY FOLKS”, I couldn’t help but smile. 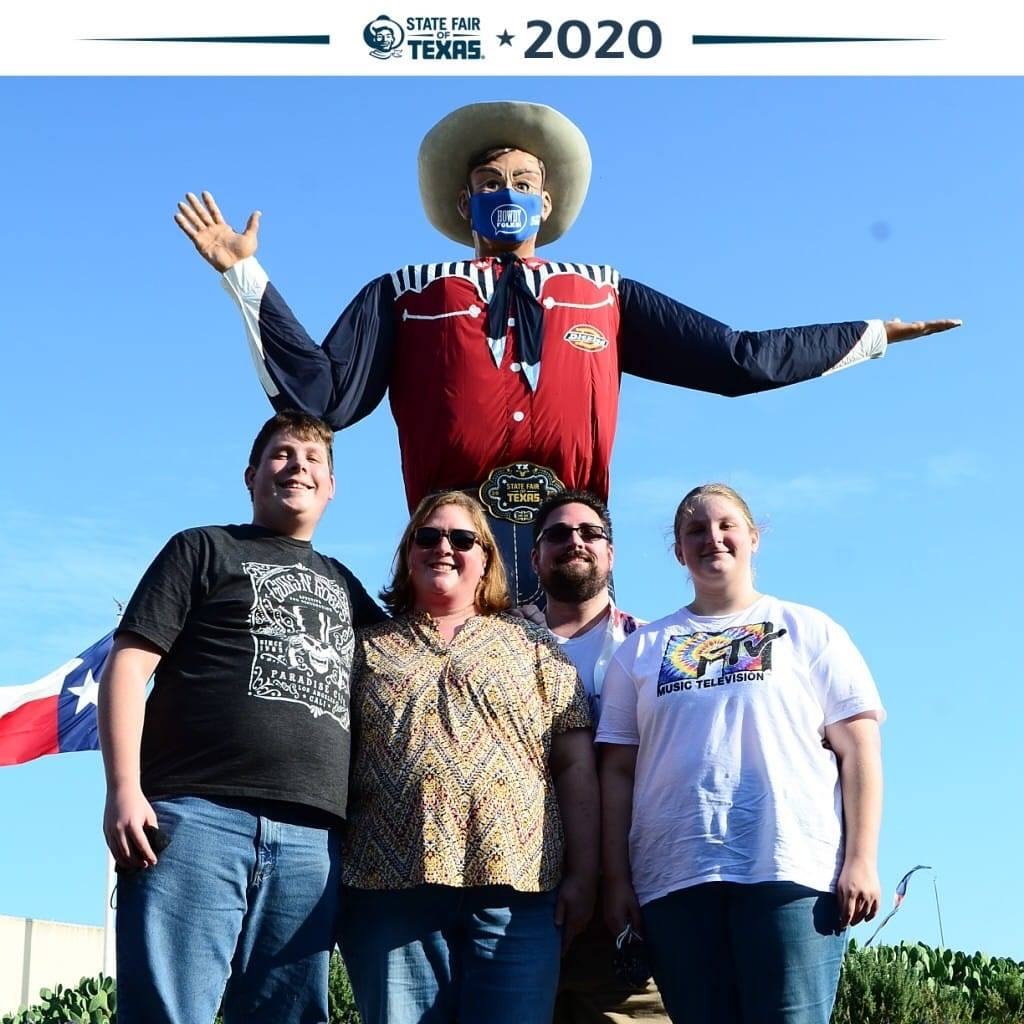 Typically, it’s difficult to get a picture with Big Tex without a ton of people in the background, so this was a bonus of this experience. A fair worker took the picture, then asked for our telephone number. In less than 5 minutes, the official picture had already been texted to us.

After the official picture we were told we could step over to one of the end booths to get a selfie or two if we wanted. So, yes, we had to do that, too. One with just my wife & I…the other with all 4 of us again. 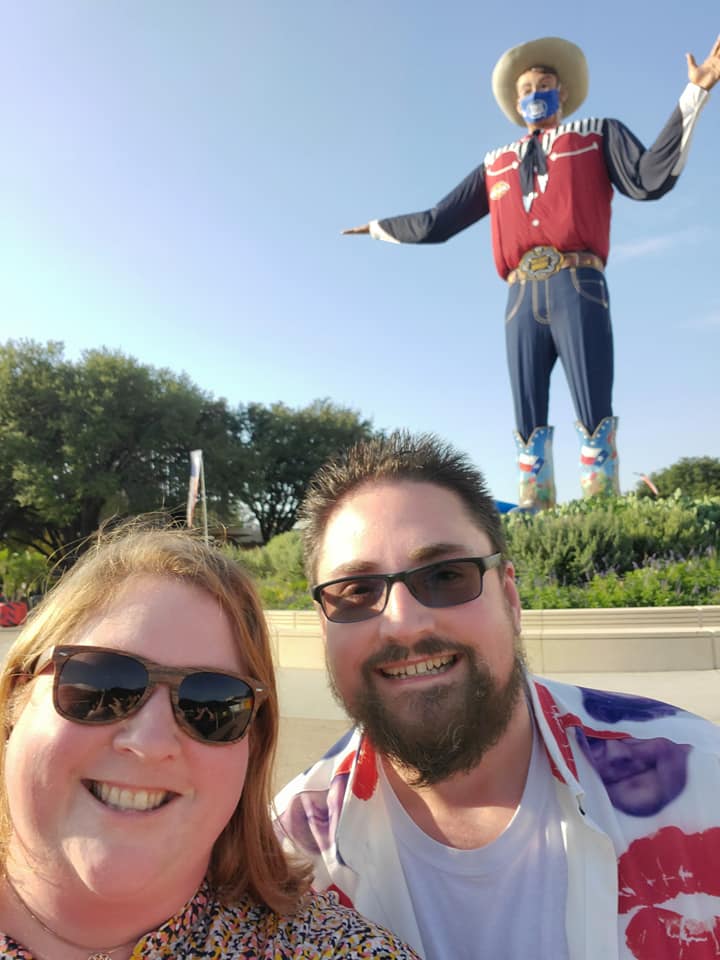 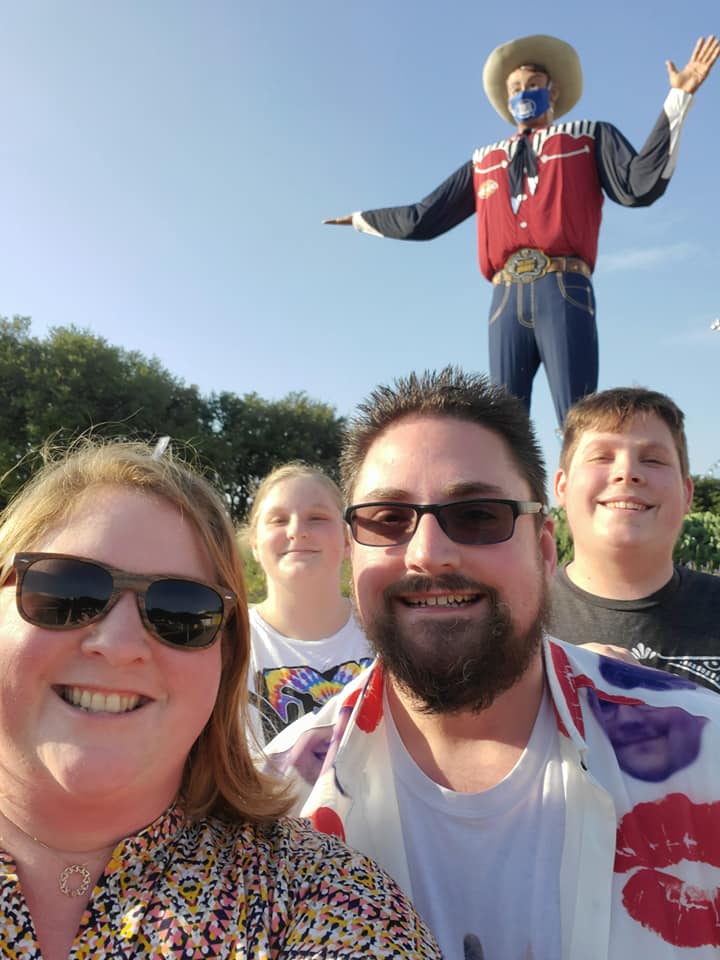 We put our masks back on, walked to the car & continued the drive-thru experience.

Last stop was to get our midway prize, by playing a “Pick the Door” game. Somehow we ended up with TWO prizes from the game — a sloth plush & a poo emoji hat. My wife LOVES both (for some reason).

Now, if we had purchased any souvenirs, there would have been one additional stop, but we didn’t order any of those. So, we continued to the exit.

They provide a parking lot (right before you exit), if you want to stop & eat your fair food picnic style. We chose to skip that & just go home to eat.

All-in-all, it took us about 35 minutes to get through the Big Tex Fair Food Drive-Thru experience. Glad they got all the issues worked out.

ALL of the fair workers, food booth workers, photographers, etc. were incredibly nice, happy & made us feel like we got a solid fair experience. I’m very thankful for their efforts.

Personally, I liked this drive-thru event better than the full fair experience, but that’s because fair park is massive & walking all over the place for a whole day is a lot to ask of a fat guy like me.

But, the point of this excursion was to provide my wife with a positive & memorable 22nd anniversary (with our kids in tow). Thankfully, with Big Tex’s help, I was able to pull that off!