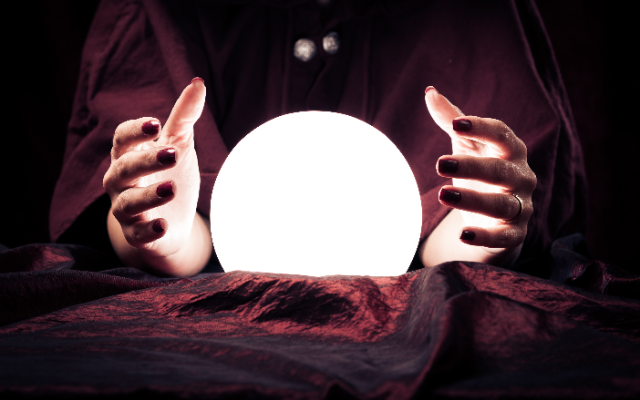 What do you think it’ll be like a century from now, in the year 2123?  Will we finally have flying cars?  Or maybe we’ll be ruled by the machines we created?

Someone went through old newspaper articles from 1923 to see what experts were predicting back then for 2023.

Some of them HAVE come true.  For example, constant airline traffic (unless you’re flying Southwest) . . . America’s population topping 300 million people . . . and being able to talk to someone in real-time through your wristwatch.

But the ones that HAVEN’T happened are a little more fun.  Here are ten examples:

2.  No ugly people.  They thought beauty pageants would become obsolete, because it would be almost impossible to choose a winner.

3.  Women will paint their teeth black to be fashionable.  Instead, a lot of people whiten their teeth now.

4.  Gasoline will be replaced by radio waves.  So, powering your car by blasting radio waves somehow.

6.  Flying from Chicago to Germany will only take 18 hours.  They were too conservative with that one.  It’s really half that now, around a nine-hour flight.

7.  Cancer will be eradicated.  Not yet, but we’re making pretty good progress.

8.  Homes won’t have kitchens anymore.  That one basically said we’d have ways to make food using, quote, “chemical formulas” and wouldn’t need to cook.  We do have Uber Eats and DoorDash though.

9.  Telepathy will exist.  That one said we’d even be able to speak telepathically with babies.

10.  Kidney koozies.  Like beer koozies, but to keep your internal organs warm.  (Wait…isn’t that just a coat?)

BONUS: Top 5 Predictions for 2123 That Will Definitely Come True!